Wood Gathering Elephants of the Empire is an Empire Consumables. It can be bought in amount of 3 in the Empire Shop which is located in the Capital City for 75 Empire Points.

The following technologies can be used improved the abilities of the Greek Villager during a mission.

Wood Gathering Elephants have extremely powerful stats for a woodgatherer. Each elephant gatherer could replace 2 default villagers for the rate of gathering wood. Like all consumables, the three Wood Gathering Elephants would cost zero population, effectively freeing up 6 pop to be allocated elsewhere without hurting wood production.

Of note, is that the speed of the elephant is 5 vs the villagers 6, but due to the elephants max capacity of 50 vs 15 at full upgrades, this more than makes up for it. 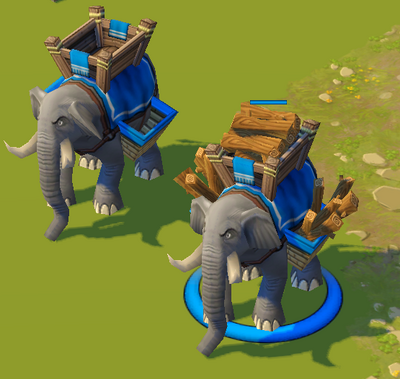 Retrieved from "https://ageofempiresonline.fandom.com/wiki/Wood_Gathering_Elephants_of_the_Empire?oldid=39313"
Community content is available under CC-BY-SA unless otherwise noted.