The Somatophylax is a Unique Infantry unit exclusive in Age of Empires Online. It requires use of an Advisor to access for the Greek Civilization.

Due to their high ranged armor and high health, these units are as effective as the Egyptian War Elephants if you consider that the player can field 4 Somatophylax for every 1 War Elephant. 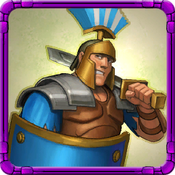 Somatophylax Commander Matius is required to train this unit. The Uncommon version of the advisor can be purchased for 300 coins at the Mycenae General Store.

Somatophylakes (Greek: Σωματοφύλακες; singular: Somatophylax, σωματοφύλαξ) literally translates to "bodyguards" in English. They consisted of seven men, drawn from the Macedonian nobility. They generally served as high-ranking military officers, holding positions such as chiliarch or general. The most famous Somatophylakes served under Philip of Macedon and Alexander the Great.

Retrieved from "https://ageofempiresonline.fandom.com/wiki/Somatophylax?oldid=39066"
Community content is available under CC-BY-SA unless otherwise noted.