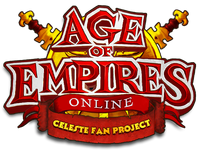 Community driven effort across the world

PF2K, Kevsoft, Luciano, Andy Pierce
Project Celeste is the name of the development team, the fan-made non-profit community server that hosts Age of Empires Online after the game's official closure in 2014, and the "version" of the game that is currently under development by the aforementioned team.

The team behind Project Celeste have worked on PvP (Champion mode) rebalance patches, along with several quest packs. One of these, The Adventures of Brennos and Comontorios Quest Pack, features a whole new city Celts-themed city, Lodi, which serves as a quest hub. This is also the case for the City of Rome, Well of Urd and Rhakotis, featuring their own new Roman, Norse and Egyptian cities respectively!

There have also been a handful of changes to the civilizations in PvE, and countless changes to maps and map consistency in both game modes.

The biggest project at the moment is to release the Roman civilization left under development before the game was shut down by Microsoft. The development will include a roman campaign, new gear, completely redesigned 3D models, animations for new units, capital city buildings, 3 new cities (Rome, Capua, and Roman Army Camp). Plus sounds and music to round up the update.

Unfortunately, Project Celeste is not making a penny from the hosting of this game. As per Microsoft's Game Content Usage Rules, the development team of Project Celeste are unable to profit from game assets - but are able to continue hosting and content development for the game as a completely free, community-driven effort. In order to cover server hosting costs for the game, forums, tournaments and associated licencing, the team accepts donations.