Live Together, Die Together is a quest in Age of Empires Online, which belongs to the Argos Co-op Quests.

Defeat all enemies with a co-op partner.
Recommended Level: 26
Co-op Only

As if there weren't enough to deal with already, a column of reinforcements has been ambushed and wiped out. The few survivors say they were attacked by Greeks. I suspect a rogue general is attempting to carve off some territory for himself.

Can you travel to the region where my men were ambushed and look for these vultures? They were numerous and powerful. You will need someone to help you. ”
—Argos Captain

“ The mercenaries must be stopped. If they aren't, we'll soon have every man with a spear running about and trying to take a piece. ”
—Argos Captain

“ You took care of the mercenaries, but it's worse than I expected. That was only their scouting force. Their actual army will not be far behind. ”
—Argos Captain 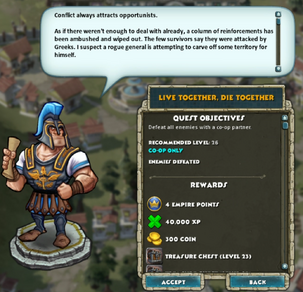 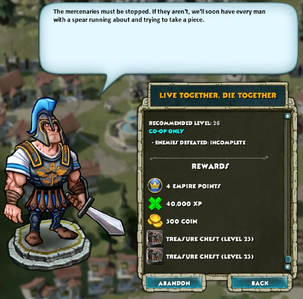 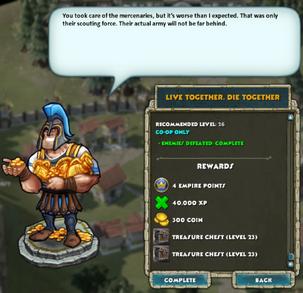