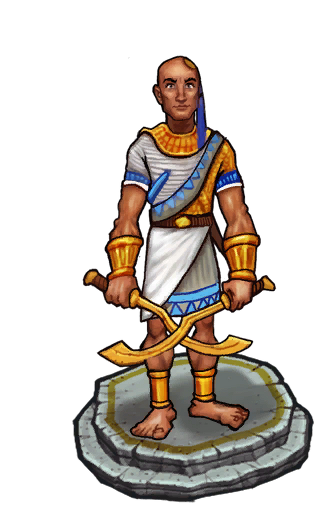 "Let us work together."

King Sesostris (formerly Prince Sesostris) is a Quest Giver in Age of Empires Online. He resides in the Egyptian Capital City, but can also be found at the Nubian Expedition and Libya at certain points of the Egyptian campaign. As a prince, he acknowledges the fact that he has no patience. After the defeat of the Badari, he convinced the player to help conquer unfriendly Nubian cities.

Sesotris later became the pharaoh after his father, King Narmer, was killed by an assassin hired by the Vizier. He states that he sleeps with one eye open and five swords on his belt.

The pharaoh also has a brother, Prince Aha, who has a problem with sleepwalking. Due to concern of another assassination by the Vizier, the Priestess in Libya constantly asks the player to protect Aha during his sleepwalking episodes.

The following Quests have Sesostris involved.