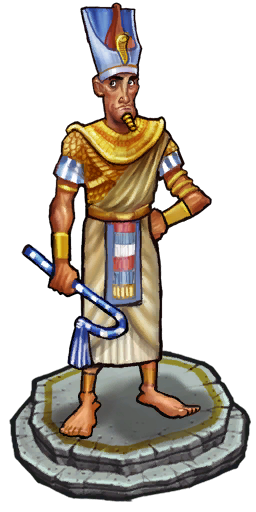 King Narmer was a Quest Giver in Age of Empires Online. He resided in the Egyptian Capital City until his assasination by the Vizier by the end of the Egyptian Campaign. His eldest son, Prince Sesostris, took his place as the new pharoah.

He is also one of the nine Skirmish Hall opponents. Using mainly cavalry units is his unique attribute. Due this preference, he is a favorite among players who host Spearman Rush.

He is also obtainable as an Advisor .

Retrieved from "https://ageofempiresonline.fandom.com/wiki/King_Narmer?oldid=32626"
Community content is available under CC-BY-SA unless otherwise noted.