The Hetairoi is a Unique Cavalry Unit in Age of Empires Online. 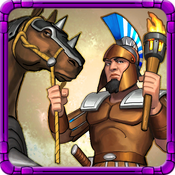 You need Hetairoi Commander Jason to be able to use this unit.

The Companions or Hetairoi were the elite cavalry of the Macedonian army from the time of king Philip II of Macedon and reached the most prestige under Alexander the Great, and have been regarded as the best cavalry in the ancient world and the first shock cavalry. Some of the Hetairoi formed the elite guard of the king. The name of the military unit means those near the king.