The Helepolis is a Unique Siege Unit in Age of Empires Online. 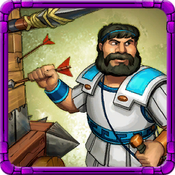 You need Helepolis Engineer Medias to be able to use this unit.

Helepolis was an ancient siege engine invented by Polyidus of Thessaly and improved by Demetrius I of Macedon and Epimachus of Athens for the unsuccessful siege of Rhodes, based on an earlier, less massive design used against Salamis (305–304 BC). The name means taking or capturing cities. If their numbers are accurate, it was the biggest and most powerful siege tower ever erected.

Retrieved from "https://ageofempiresonline.fandom.com/wiki/Helepolis?oldid=30580"
Community content is available under CC-BY-SA unless otherwise noted.