The Headhunter is a Celtic Cavalry Unit in Age of Empires Online.

The consumable Mercenary Headhunters is equal in stats by rarity to the Advisor headhunters, but can be used by any civ, do not cost resources or population, and come in limit quantity with a cool down timer on summons. 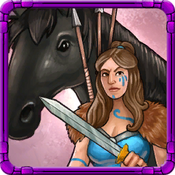 Requires the Headhunter Etain advisor card to be active in the Advisor Hall.

The Celtic tradition of headhunting was centred around the belief that the head housed a person's soul. Ancient Romans and Greeks recorded the Celts' habits of nailing embalmed heads of personal enemies to walls or dangling them from the necks of horses. Heads were also offered as sacrifices to the gods.

The Headhunter unit itself is fictitious, and is largely based on popular legends about Celtic warrior women. One such tale does tell of a Celtic queen who beheaded the Roman centurion who fully had his way with her, and presented the head to her husband as a sign of her continued faithfulness.

Retrieved from "https://ageofempiresonline.fandom.com/wiki/Headhunter?oldid=38852"
Community content is available under CC-BY-SA unless otherwise noted.